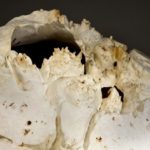 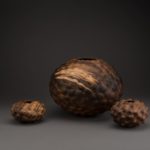 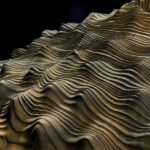 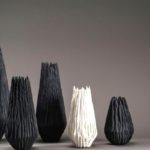 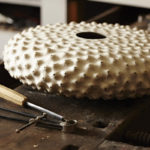 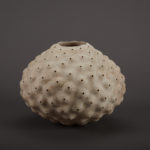 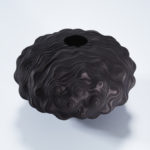 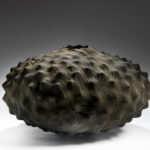 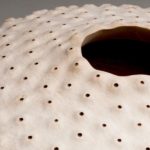 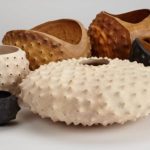 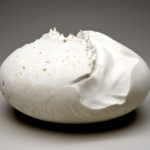 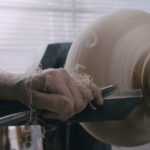 Biography
“I peel back bark to reveal the organic chaos that can exist in the material itself and build up layers of
texture through carving and sandblasting. I use the vessel form and surface pattern to explore the layers
and fissures between creation and decay and the erosion of nature.”
Eleanor Lakelin is a British artist, creating vessels and sculptural objects in wood. Her distinctive forms
are created in response to the passage of time etched into the fibres of the material.
Brought up in a remote Welsh village, Eleanor taught English in Europe and West Africa. A renovation
project rekindled her longstanding passion for wood and she retrained as a cabinet maker. For the last
twenty years Eleanor has dedicated herself to her artistic practice and honed her skills through a series
of masterclasses.
Eleanor explores her fascination with the natural properties of wood using a traditional woodworking
lathe and centuries-old chisels and gouges alongside modern techniques and tools. Provenance is of
particular importance and she only uses wood from trees felled in the British Isles and in particular Ash
and Horse Chestnut Burr.
Eleanor’s work is exhibited internationally and included in prestigious private collections. She is the
recipient of notable awards and commendations including a Wood Award 2017 (Bespoke category),
Perrier-Jouët Arts Salon Prize 2014 (nomination) and The Cockpit Arts / Worshipful Company of
Turners Award 2011.
Eleanor is represented by select galleries including Sarah Myerscough Gallery, Taste Contemporary
Craft, Flow Gallery, CAA (Contemporary Applied Arts) and The New Craftsmen. She lives and works in
London.
Contours of Nature Series
“I’m fascinated by wood as a living, breathing substance with its own history of growth and struggle
centuries beyond our own. I’m particularly inspired by the organic mayhem and creative possibilities of
burred wood. This proliferation of cells, formed over decades or even centuries as a reaction to stress or
as a healing mechanism is a rare, mysterious and beautiful act of nature.
The twisted configuration of the grain and the frequent bark inclusions and voids are challenging to work
and the forms difficult to hollow but the removal of the bark reveals a secret, ethereal landscape, unseen
by anyone before. Parts of the form are sculpted smooth and others left raw and untouched. Heavy,
forceful hollowing gives way to sandblasting and fine and dextrous work cleaning up every fissure and
contour. Pieces are bleached and scorched and tirelessly hand-worked to different lustres and an
alabaster-like smoothness. They become objects that invite touch and objects that touch us, reminding
us of our elemental and emotional bond with wood and our relationship to the Earth.”
Time and Texture Series
“I have always been inspired by landscape and the way natural elements work on it and break it down –
how edges are softened and rounded and lines and form fragmented by erosion. Using a technique
pioneered by Canadian turner Michael Hosaluk, I build up layers of texture through carving and
sandblasting which reference these patterns and lines in landscape and nature.
Pieces in this series are made from species of wood such as Oak, Ash and Cedar – where wood grows
at a different density during different times of the year. By sandblasting across the surface, the lighter
wood can be blasted away – a kind of speeded-up erosion. Time itself feels etched into the fibres of the
material. By carving to different depths within the piece and then sandblasting through another layer, a
moving, sinuous pattern is created which speaks of natural movement – of wind, sand, rhythm, flow and
of time.” 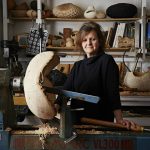