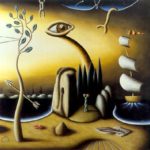 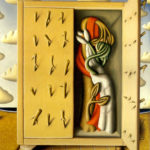 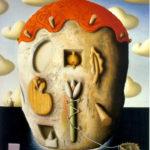 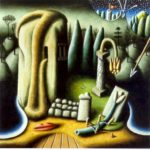 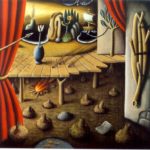 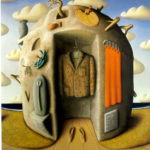 www.robinmasonlondon.com
Robin Mason (born 1958, Porthcawl, South Wales) studied under Mario Dubski, Peter de Francia, John Golding, Cecil Collins, Ken Kiff, Victor Willing and Anish Kapoor during the 1980’s. He works on canvas, linen, board, and paper and makes objects and installations in mixed media.
The memory of the death of his friend, and a trip to post World War II Germany under threat of invasion from Soviet Forces, both had a profound effect on forging an intrigue in the forests of Rhineland and later, the German Artists who confronted their own histories, their homeland and relationship with their past.
The use of metaphor in the poems of Heinrich Heine have played a role in developing Mason’s themes of landscape, journey and autobiography both in his paintings and his exploration of performative writing. The work of Matthias Grunewald’s Isenheim Altarpiece has been central to the evolution of extant themes and research.
In his entire body of work Mason’s reference with the past interweaves parallel journeys between the art historic and the personal. A consistent re-imaging of theatrical backdrops and stage-like structures inhabited by amorphic tree and flower forms aligns the work with both surrealism and Northern European medieval images. This stage-like presence is a reflection of childhood performances on the stage, the theatricality of high-church ceremony and the fairground paintings of his early life in Porthcawl.
Themes from transcribing historic art works have included; Homage to Bocklins Rock which used the Leipzig version of Arnold Bocklin’s Island of the Dead painting as its focus and After Colmar which references the effect of his first visit to view the Isenheim Altarpiece in Colmar. Passion brought together a body of work that explored Rubens’ Deposition in Antwerp Cathedral.
A visit to Documenta 11 in 2002 brought about a stutter in his output. The theme of Globalism that ran through Documenta 11 brought about a crisis of confidence in his position and relevance as artist. Repeated journeys into the Black Forest and the Rhine became a search for his identity as he visited museums and galleries on reconstructions of his childhood holiday of 1968 from Porthcawl to Germany.
In 2010 he made the painting installation In Dialogue in the isolated 13th century church, St. Thomas a Beckett in Fairfield, Kent, based on his decade-long study and series of transcriptions of the Isenheim Altarpiece by Matthias Grunewald.
In 2011 he made a parallel journey to the author and critic Charles Marriot, who in 1911 published The Romance of The Rhine a book documenting his journey from London to Basel.
At Documenta 13 in 2012, the shift in emphasis from Globalism to material, matter and individual subject brought about a reopening and new confidence in Mason’s practice that reflects and quotes from his search and journeys over the previous ten years.
Mason has lived and worked in London since 1984. He is currently
Course Leader of Painting (BA & MA) at City and Guilds of London Art
School. 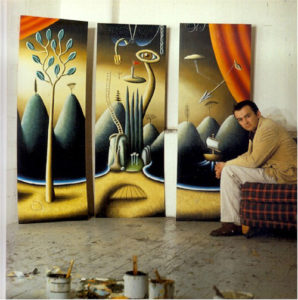